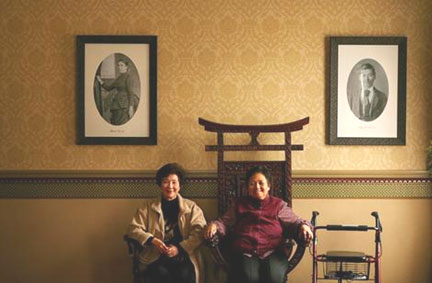 They eat Cantonese food three times a day, play mah-jong, watch Hong Kong cable TV and, for those who can get out of their chairs, meet for Tai Chi classes in the recreation room. When they need assistance, the staff all speak their language - Mandarin or Cantonese.

For elderly Chinese Australians, losing their limited grasp of English as their minds fade, these cultural reference points provide great comfort and security in their old age. "I really like it here, everything, everybody," said Lily Mah, speaking briefly in English for the only time that afternoon.
"Here" is Quong Tart at Gallop House, a 63-bed Chinese-specific aged care facility in Ashfield, which opened in the middle of the year. It is an exercise in niche marketing and a response to cultural diversity in Australia's ageing population. Sydney has only 614 Chinese-specific aged care places (350 are high care), and census data indicates there will be up to 30,000 Chinese Australians in their 70s by 2026. It's more than sympathetic aged care; it's good business.

This is why NSW's largest aged care provider, UnitingCare, is moving into the market. Gillian McPhee, the firm's NSW regional director, said ethnic-specific care for the elderly had become a mainstream issue. "Twenty-two per cent of the Australian population is born overseas and in the over-65 age group I think it's nearly one-third."

She said the primary reason for establishing such centres - Quong Tart is its second for Chinese Australians - was "as a provider, to meet and reflect the needs of local communities in which we serve - but we also see it as a point of differentiation".

The firm has previously catered for clusters of residents from the same ethnic background, such as Indonesians, but the Chinese were the first group provided with a dedicated facility. They are the largest ethnic group in Sydney and were the leading country of origin for migrants in the 2006 census. Ms McPhee said the not-for-profit organisation would "absolutely" consider ethnic-specific facilities for other groups.

In creating a Chinese environment, the designers at Quong Tart considered language, decor, music and cuisine. The brochures are red and glossy. The name comes from the businessman Quong Tart, who lived in Gallop House in the 19th century.

"The relatives are very supportive, they will come in at dinner time to help feed the residents, and you need to allow for that," Ms McPhee said.

For Mrs Mah, 64, the lacquerware screens and ceramic urns provide a haven from her previous crowded life with her husband and 15 cats. He chose to stay in the family home. Though she came to Australia in 1965, and worked as a taxi driver, her English was never great and is now all but gone. It's a relief to her that the staff speak Cantonese.

Anh Diec Trieu, 73, also loves the firm and conversation. Her husband, who can no longer speak, is in an Anglo-style facility in western Sydney. He was the family communicator, speaking Chinese, French and English.

In the afternoons the women enjoy a game of mah-jong with a distinctly Chinese garnish. When a staff member says there is no gambling during the games, Mrs Mah's fading English comprehension returns.