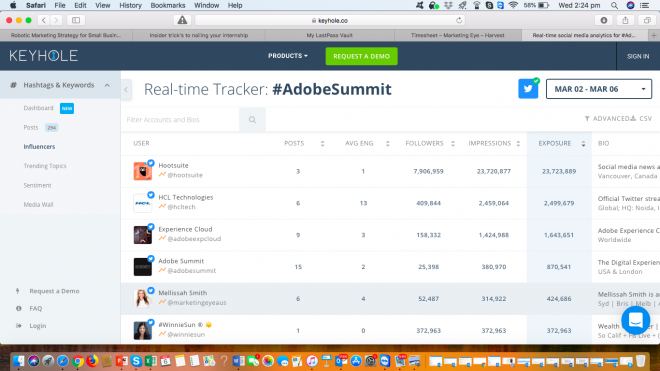 IS BEING AN INFLUENCER ALL THAT IT'S CRACKED UP TO BE?

11 Mar
In the middle of the night, I woke up. I had arrived in Atlanta late yesterday and made the fatal mistake of going to sleep early. Mostly because I felt the need to be fresh today.
My LinkedIn feed had a guy spruiking his public speaking gig by telling the world (LinkedIn followers) that he is an influencer and that as such, he will change the world. While that sentiment is a bit far fetched for me to swallow, I am an avid believer that sometimes you have to step out of your comfort zone to really make a difference.

We can all sit there and complain about the things in our life, but without standing up and taking responsibility for it, then we are just another complainer (or mumbler).

As I read his message, I couldn't help but think that he was a tad inspiring and also at times very factual. He talked about how opinionated he is and why that is the difference between him and others. That is what made him an influencer.

I looked him up further, and by my own accounts, I probably wouldn't call the guy an influencer although is post was food for thought. However, he was right about one thing. The more controversial you are, the more engagement you get. If you want to go viral, you can go three ways; be funny, be inspirational or be controversial.

HOW A WOMAN CAN MAKE HER MAN MORE SUCCESSFUL

If you want to be remembered, the latter is always a start. I remember some years back writing a blog "How a woman can make her man more successful." The uproar - OMG! The millions of clicks blew my mind, and the commentary, well, for me it was laughable but some people were deadly serious and quite a few were so outraged that they threw every insult imaginable. I knew at that point, that things were going to change for me forever - and they did. My following went up, my blog went through the roof and people were coming up to me and asking me whether I was the "girl" who wrote "that blog". I wasn't sure whether I should take ownership or not for a while because I might just get a slap in the face - that's how outraged some women were.

The meaning of the blog was pure and simple. It could relate to men or women. If you want your partner to be successful, make their life easy, keep boosting their egos, make sure they know they can do anything and in general create an environment where success is all they think about. Give them the confidence to achieve their goals. Of course, I didn't quite write it like that and I may have added things like "wear lipstick" which even to me is ludicrous, but the overall message was powerful. Magazines and writers picked the blog up from all over the world and it became an opinion piece (not in favor of me might I add). In any case, it put me, and my company on the map.

WHY MARRIED WOMEN ARE MORE SUCCESSFUL

A few years later, another blog went viral. "Why married women are more successful" was another tongue in cheek blog written originally on LinkedIn and then on my various other websites. 74k people on LinkedIn and about half a million on other mediums went ballistic over this blog. Unfortunately, most people only read the headline, so the attacks on me personally were...hilarious. I say that because I have never been married, so the blog wasn't saying that I was successful because I was married - yet more than half of the haters wrote messages along those lines. LinkedIn was inundated in complaints and somehow I went from getting thousands of people reading my blogs to few...did they change the algorithm or put a black mark against my name? This blog was shared by LinkedIn at first on all their business related sites, but when the complaints came in fast and furiously, I think they took a few steps back. Shame on them. Read the blog and you too would have a good laugh. There were over 5k comments just on LinkedIn with few in my favor. Once again, the basis of the blog is definitely something many people should think about and a lot of it rings true. Of course, I tried to make it a little funny and blew up some areas, but in general, the message was loud and clear.

I also do a bit of public speaking, media and I have a charity. You know the formula and how it works. At some point, people start following you and then others follow suit.

Being an influencer has a lot of perks; free hotels, holidays, clothes, homewares and invitations to everything imaginable. It opens doors and quite often in my space, people know who I am before I meet them. This is liquid gold for my industry.

But the downside is far more real. The need to be controversial is a burden. You need to continually come out with "shocking" things and hope that one of them doesn't land you in real trouble. I have even had Chelsea Handler write a few tweets to me attacking me on one of my stances, and she isn't the only high profile celebrity to do so. I can't say I hate that though - as I find it funny.

For most of the past 2 years, I have slowed down on the controversy until I started doing a bit on Sky News as a Political Commentator. Of course, with no controversy, I am boring and without voice. I had to dig deep and think about where my allegiance lies on the political landscape and be prepared to stand up for things I believe in. I'm a tad gun shy because trolls are ruthless until you remind them that they are only making your Twitter account more popular and giving you a higher influencer ranking. The latter being true and that too is an addiction. If the trolls are in action, your influencer ranking will go through the roof. Shocking yet true.

To be an influencer you don't need to be smart, pretty or have much going for you. There are thousands out there that have hundreds of thousands of followers and they don't have much to say, they aren't that pretty and those selfies - wow... well, they look like a blow-up doll.

To be taken seriously is hard work and takes a lot of consideration. It's taking your personal brand and business brand to a new level, but you can't be the same as everyone else.

"BE YOURSELF, EVERYONE ELSE IS TAKEN." OSCAR WILDE.

In a few weeks I head off to #AdobeSummit as an Insider which is their version of influencer. Once again I am lured into the statistics. As of last week on Twitter, I was the highest ranked real person influencing #AdobeSummit on Twitter. The rest were big global corporations. But I haven't posted anything for a few days so the chances are, I have dropped. The lure to be at the top, and the reality that it really is hard work - is bigger than you think.

How to Grow Your Business Using Thought Leadership