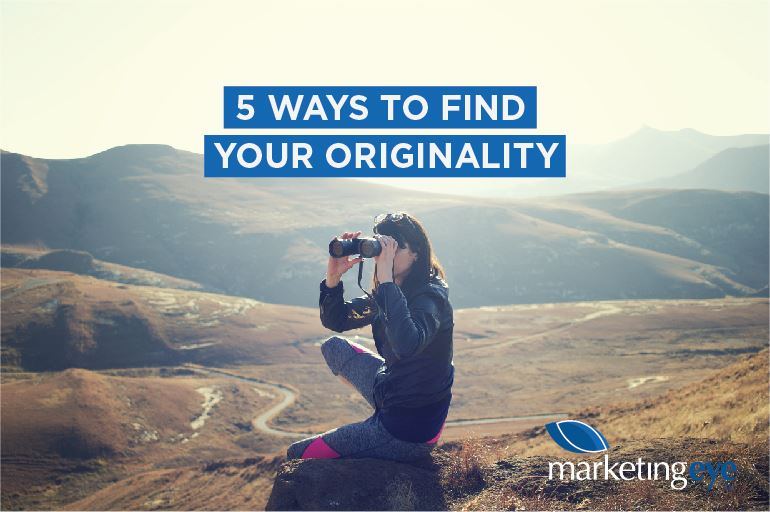 5 ways to find your originality

10 Feb
I read an article recently about journalism and the fact it has an originality problem not a plagiarism problem. Author Kelly McBride says, “These days, we must see always what others have written before we begin – and there’s so much that’s been written about any given topic because writing now is mostly the continuation of a conversation already in play.”

Those who are truly original start the conversation, but are their conversations are left, or is there a way to utliise what has gone before and make it your own?


Everyone is struggling to be original
It’s not just writers who are struggling for content or originality. Singer Sam Smith recently won a Grammy for the song Stay With Me. It took me a few days of racking my brain (when all I needed to do was Google Sam Smith plagiarism), but it finally dawned on me that the chorus was uncannily similar to Tom Petty’s Won’t Back Down.

It turned out that Smith had to give Petty and fellow writer Jeff Lynne of ELO fame a 12.5% stake in the song. Smith, who is just 22 years old, claimed he never heard the song. Nobody doubts the veracity of his claims and Petty wasn’t fussed either way. He told the Washington Post: “That happens sometimes. You look up, and you think you’ve come up with something, and you realize somebody else has done it first. You try not to let it bug you. What bugs you the most is when you write something and then realize it’s somebody else’s song.

“That’ll happen to me two times a month. I’ll be working with something and then realize I’m channeling this melody from somewhere else, and then I have to abandon the idea. But there’s only so many words and so many notes, so sometimes you do cross somebody else’s territory.”

How to be original in marketing

It’s the same with marketing. There are only so many notes. There’s only so many ways you can pitch a story, write an EDM, use social media etc… And it’s not like you are ripping people’s ideas off, it’s just that there are very few ideas left. So the best way to make an impact is to take an original approach to traditional methodology.

Here’s 5 ways to be original in an unoriginal world.

1.     Use your voice.
I’ve said this before and I’ll say it again. Every company, every individual has its own voice. Don’t be afraid to use it. While you may be writing about the ghosts of marketing past, your voice will enable you to brush off the cobwebs and fell the chains. To find your voice ask yourself: what do you stand for, what are your passionate about, what is your message, if you had all the money in the world what would you do, how do you see the world, how do you want to change the world, what has influenced you?

4.     In a sea of knock-off and unoriginal concepts, what may make you stand out is the quality of your work or service.
Sam Smith may have won a Grammy, but Tom Petty is one of those go-to-guy’s of classic rock, because the body of his work is predominantly of a higher quality than many of his contemporaries. And the difference between Smith and Petty is that Petty was the original and people with a real knowledge of music still remember the song, because for many it was a quality tune. There is originality in doing things well.

Being original is difficult but not impossible

The best quote I’ve seen about originality comes from a musician and writer by the name of Keith Andrew. He says, “Originality is difficult but not impossible. It is just now – more than ever – a by-product of authenticity. And if through that authenticity something resonates with the listener that is what matters. That is what makes a difference. One could argue in circles about what is truly original anyway – but what is certain is it is pointless to seek after it. It may come – but it must be an organic arrival.

« Why Facebook and Instagram can improve your blog
$128,000 worth of consulting hour sales in her first month - learn how she did it »