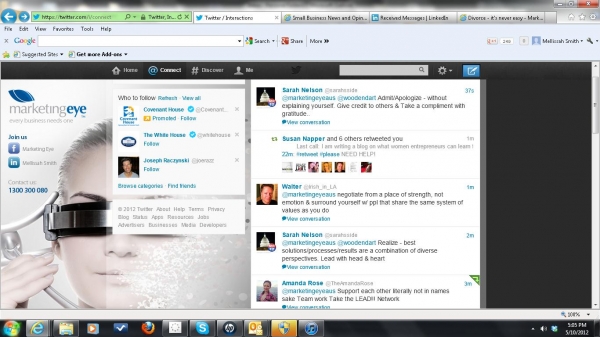 What women entrepreneurs can learn from their male counterparts

06 Oct
Every day I meet with male and female entrepreneurs. In some ways, I would love to use these meetings in a study about human gender based entrepreneurial behaviour because it continues to fascinate me the inherent differences between men and women entrepreneurs.

As a woman entrepreneur, there has been many advantages:

1. If you are half decent looking, people of both sexes want to do business with you. After all, how many people really want an unattractive PR chick or marketer?
2. If you are young and female, better still. Everyone wants to help you. Men over 40 want to father you and help you be successful. Men your own age want to assist because they are proud that you are having a go.
3. When things are not going your way, it's easy to put on the female charm.
4. You can dress to impress or dress down when need be.
5. You can see the human side in every situation.
6. You know why people are making decisions like they do because you are interested in how people think and feel.
7. You have more compassion and empathy for those around you.
8. You don't necessarily have to be the richest. Instead, being the best will do.
9. It's very easy to blame irrational decisions or behaviour that was momentary on PMT.
10. There is no such thing as failure. Worse case, you can get married and have children.


There are many disadvantages in being a woman entrepreneur but they are often two-fold. For instance, being a mother; if your child is sick, your husband usually expects you to leave work first and what mother wouldn't want to do that anyway? Back at the office, your male colleagues who may not have children, nor understand this predicament may then think that you are unreliable or not focused enough on the job at hand.

With only 12% of women owned companies seeking angel capital, it is easy to generalize that perhaps women should take a leaf out of their male counterparts books. Why is it that women don't seek capital upfront for their businesses? Why do women put the hand brake on at $1million turnover, with most failing to be more than a one-man-band or go over the million dollar mark? Are women afraid of success? Is there too many influencers that affect their ability to succeed? Are women too emotional?

Women are 50% more likely to start a business than men yet men are deemed more successful all round in business. When a woman hits the top of a big corporation, even men label them as being more like them than a normal woman. And it's true. Seriously, women that hit the top of many businesses often are strong willed, dominant, fearless women who will do anything to succeed. A bit like their successful male counterparts, don't you think? Men are far more willing to focus on the end goal of making money while women entrepreneurs often spend more time thinking about the process.

Downsides on how people view successful women aren't too favourable either. Women's assertiveness is considered bitchy and they are considered to self-limit their ambitions. Even if I look at myself, I am aware that many people think that I am single, mildly successful and financially independent at the expense of being a woman. "You're more male, than woman" said a man at a recent conference. How do you think that makes me feel? I want to be a woman and I want to be successful but being likened to being more like a man is not the most flattering comment of the week.

Another interesting fact is that women turn away from satisfying and meaningful work, but less glamorous businesses can make a contribution to society and also make you rich. For instance, Marketing Eye has a majority of clients in the "unsexy" space like mining, logistics, supply chain, stevedoring, transport, sustainability and technology while many of my marketing friends who are women focus on fashion, food and restaurants.

Women are also their worse enemies - against each other. You would not believe the amount of times I have heard other women entrepreneurs put each other down both in areas of business and then taking it personal to the point of what they look like or what they perceive one would do to be successul. ie. sleep with anyone including clients. While there are many groups out there celebrating women in business, often women can feel insecure about another woman's success or failure for that matter.

So, I took it out to Twitter and asked "what can women entrepreneurs learn from their male counterparts" and this is what came up:

@JeremyScrivens nice one Mellissah - I would add 'and how are we contributing to theirs?' cheers
@Jenna_Goudreau Confidence. Willingness to go after funding.
@feraldogstudio Generally women tend to be less agressive in biz than men. Don't know if it's good or bad, but aggressiveness has its place
@zahrasays in 140 characters? We both have a lot to learn from one another....
@mattygeorge change is good, people are people and relationships are everything
@twilli2861 Nothing and everything! It depends on the starting point
@gemichelle Saying no isn't the end of the world & could be the most important word you say all day
@tartancat Simply that they're not different. An entrepreneur is an entrepreneur, not dependent on boobs or balls!
@gemichelle That understanding basic accounting and cashflow is important to keep control and make correct strategic decisions
@jasongreenhalgh Be confident and network, network, network (old school style)
@mwiings I reckon harnessing aggression, turning into a positive force without coming across as a whiner/nagger.
@irish_in_la identify, commit to and protect your corporate culture. Breath it in and live it! Your biz will ultimately fail if you don't.
@sarahsside Admit/apologize - without explaining yourself. Give credit to others and take a compliment with gratitude
@irish_in_la negotiate from a place of strength, not emotion and surround yourself w/ppl that share the same system of values as you do
@sarahsside Realize - best solutions/processes/results are a combination of diverse perspectives. Lead with head and heart
@theamandarose - Support each other literally not in names sake. Team work. Take the lead! Network.
@duckduckjoey "Don't be too naive when talking to people. Most people want their two cents out of you"
@theamandarose No emotions stay focused all about ROI no bitching confident take risks
@Meredithmobley I think women #entrepreneurs can stand to learn how to remove emotion from business
@polentamcphee stand by your decision, own it even if it fails
@polentamcphee Don't lose your femininity - we are are not men, we function diff cont.
@beckysueolofin hmm that's really something to ponder on. Responding and not reacting
@heidimyers Eckes comparison of gender body language applies to women in business
@_debrasinclair Taking risks in business
@summerboag choosing battles wisely and not as an immediate reaction. calculating various ways to get results
@heidimyers waht about gender specific communication (body language when presenting or negotiating)
@fleurbrown an old male boss taught me that. Had no idea I was doing that. Being nice gets in the way of being effective
@fleurbrown don't make apologetic opening statements in meetings and keep things simple
@johnkelly1 Word entrepreneur never had male or female attached. Individual believing in their idea
@debbiethompson being ok with talking about your success rather than playing down your own success, for starters...
@launch_group don't make apologetic opening statements in meetings and keep things simple
@mickfromvic drive your enemies before you and hear the lamentation of their men
@irish_from_la my advice is to negotiate from a place of strength, not emotion and to always build a culture around you  based on values
@davidbassanese start small with a nub of an idea that makes money and expand from there. Don't try to get it right first. Dave
@digital_sydney persistence. men are persistent w/out apology. Women are more aware of stepping on toes and hesitant to ask and ask again
@sarahsside compliment others for their gifts - it creates great synergy. criticize only if it improves the results/outcomes
@sarahsside if something is said - ask what the person meant without assumptions then draw conclusions (communicate)

« Do you have an egomaniac in your office?
Happiness: how to change your business outcomes »