Not happy? Employees feel what you feel. Find out how to fix it.

13 Dec
Are you the Xmas Scrooge or do you bring joy to everyone around you?
Does going to work mean that you change hats and become a negative, overly opinionated, in-your-face style manager who nags your employees into being so afraid to communicate?
Do you conjure up ways to make others miserable without even knowing it?
Are you too pedantic about detail that you lose sight of the big picture?

22 Nov
Constantly learning in life is a must. If we don't, we all know what happens.

We fall behind, become less interesting and life doesn't come as easy as it should.

10 Nov
Who else finds it hard to fathom that only 15 years ago, real estate agents actually believed in customer service.

How times have changed! Speaking to a real estate agent at Lemon Baxter today, I was appaulled at how little they care about customer service and their "I don't give a F***" attitudes.

Being Sick Has It's Rewards

06 Nov
Last week, I ventured to the dentist after chipping my tooth when I was out to dinner one night.

The dentist, did his stuff and advised that a cap would need to be placed on the tooth and that the process takes a few stages. As always, I put my faith 100% in the Dentist afterall he knows his job and that is what I am paying ridiculous amounts of money for.

Then I went home. Pain. And more pain. And even more pain. Having a high threshold to pain, I tried to bare with it and as I am not a fan of taking medication of any type, I was reluctant to even take over the counter pain killers.

Eventually, I could take it no more. I was in pain. Real pain. Something I realised I had never experienced before. After ringing the Dentist several times to explain this and getting his assistant who organised some tablets from the Pharmacy for the infection, I became not only frustrated but in complete dispair. What was I to do. Then finally the Dentist rung me back and said to come in and that the pressure needed to be released (or something like that). After a visit and another hour of excruciating pain, I was given pain killers to go with my medication.

I don't even take panadol, so for me to take pain killers is a big thing. I have had 7 operations on my sinus' and not once did I take the prescribed pain killers. But this was real pain. So I took what was prescribed. I was in and out of sleep for an entire 3 days.

What this has taught me is that getting a second opinion isn't a bad option. Know your body, if you medication does work differently when in your body than what it is supposed to, talk to your practitioner. It was obvious that the painkillers were too much for my body and I could not keep my eye's open for more than an hour at any given time. There are not  enough quality magazine's at the local 7-Eleven and magazines tell 'lies'. People may not be married, having children, getting a divorce or fat - it's as simple as that.

The medical profession could mostly do with some help from marketers because they may be good at what they do, but they are lousy at communicating or being open to communicating. While I like a good doctor, it is equally as important that they can explain what is going on and be responsive when need be - particularly if you are paying them a lot of money.

Last, but not least, being sick for an entire weekend and not achieving a single thing, isn't fun. In fact, I don't want to ever spend a weekend like this again. Being healthy and proactive in ensuring that your body is functioning at its best is paramount. I would prefer to know sooner rather than later that I have an illness or that something may go wrong so I can prevent it rather than finding out when it's too late. Check out www.irismedical.com.au - they have executive health checks that thoroughly test ever imaginable illness and bodily function. I highly recommend it. If you are an executive, talk to the company you work with and see if they will help with funding it as healthy employees are essential to any business.
Read more... →

01 Nov
﻿Best selling author and relationship counsellor John Gray is on to something, or at least the 7 million people who bought his book think so. The self-help book that proclaims that 'men are from mars, and women are from venus' has an analogy that by many accounts seems to run true.

If you think about the relationships you have in life and the difference between female and male relationships, it's easy to ascertain why there is often a miscommunication or misunderstanding based on the gender of the person you are communicating with.

The best destination in the world

04 Oct
When you work hard, it's important to make sure you reward yourself.

People reward themselves in many different ways like buying a new dress, a watch, a new car or a holiday.

Anyone can learn how to be a great leader

25 Sep
When you start a small business, it's hard to think about what leadership style you would like to incorporate in your company. Typically, your thoughts are on what product or service you would like to take to market; your business plan; how you are going to get sales; and how you will attract the right people to work for you.

Leadership styles is often thought to be a medium or larger business thought-process.

Change the world : Is it possible? Featured

22 Sep
Each year I embark on a journey to rediscover myself, my business and my world. It may seem a little philosophical, but it's true.

I do this, not in a traditional way of going into a zone where you are by yourself and you spend time thinking and analysing, but by going away to conferences. In particular, entrepreneurial conferences.

Say NO! to clients - and you will grow faster

01 Sep
It's a lesson that I learned far too late in the game, but nevertheless, I have learnt it and am reaping the rewards.

When clients are rolling in the door, most entrepreneurs are counting the dollars and working out ways in which to service them.

In the past, I have said 'yes' to far too many dodgy characters - people who I knew would never pay their bills, liars and people who just don't fit in with our brand and culture. Every single time, it ended in disaster.

01 Aug
Interesting to find that salesforce.com is listed as the world's biggest innovator by Forbes Magazine. I remember when the company first came to Australia, my good friend and someone who has been an amazing mentor to me Ad Nederlof told me all about the company as he is one of the world's most famous CRM pioneers. I kind of forgot about how big they really are until I read the story. Check it out on www.forbes.com Innovators - The Nifty 50.

Carbon Tax - is it time for small business to take notice?

10 Jul
Having worked in the sustainability sector for the past 10 years, marketing businesses 'green' credentials and promoting a greener way of doing business, running your business and getting consumers to understand that making a small change in what you do can mean a big difference to the environment - it's no surprise that the new carbon tax is something that I am becoming increasingly familiar with.

None of us is as smart as all of us

13 Jun
Whether you are a big business or a small business, "none of us is as smart as all of us" (ref: Kenneth Blanchard, The One Minute Manager).

Truth be known, I don't think I am very smart at all, but collectively with the talents of my team at Marketing Eye, we help small businesses grow and most of our work is pretty awesome (if you ask me!).

Reflecton is a beautiful thing

28 May
I was 17 when I first started work, and through a fated role in an advertising agency, I met a group of young journalists and television presenters who have become my lifelong friends.

They worked in television, newspaper and radio in regional Queensland. It wasn't long before each one of them, had offers from bigger cities, because what they all had in common, was that they were incredible journalists. Today, we are all connected in one way or another, and I think it would be safe to say, that we are each as proud of the others achievements, as that of our own.

17 million tonnes of landfill every year comes from Australians households

There are some brands that do the ‘right’ thing and other’s that just think commercially. I am very impressed with dyson, a global company that makes hundreds of different products, putting a firm focus on being environmentally conscience.

They actively invest in ensuring that their appliances, and in particular, household appliances have as little impact as possible on the environment by encouraging customers to recycle.

The biggest stars are often under your nose 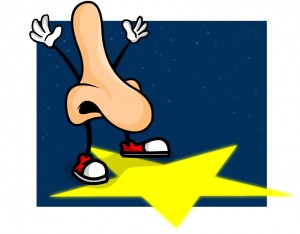 What a week – actually, what a month!

It’s been a very big start to the new year and in many ways I am incredibly grateful. Business is booming and opportunities are out there for the taking. I have also given myself a new role in the company that I love so much – Marketing Eye.
Read more... →

Business Models – which one is best

Optus says NO! not Yes As It Proclaims

Byron Bay… the hottest place for a management retreat