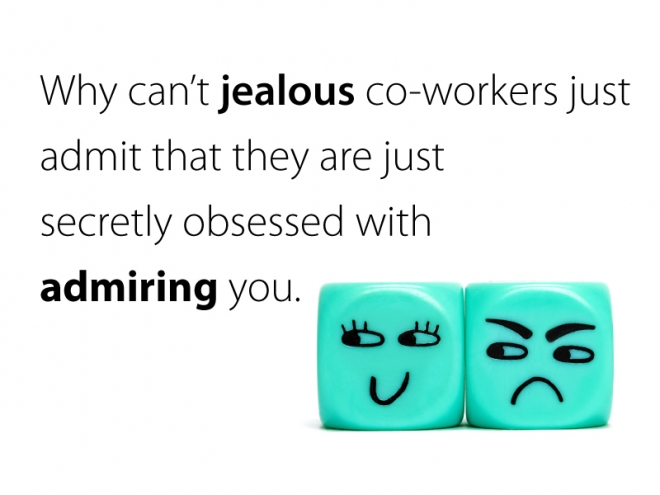 Jealous that someone is climbing the ladder faster than you?

17 May
They say that jealousy is a curse. I tend to agree. It hinders your judgement and affects your ability to see clearly - and that's just the start.

The green-eyed monster is a mental cancer (B.C. Forbes quote), and can be a huge culture killer, leaving employees that are affected by it disengaged and unproductive.


Smaller organizations feel the pinch a lot more than a larger organization which can handle jealousy or envy if you like, by moving people from one department to another, or using human resources to intervene.

Employee emotions, and in particular, envy, are disruptive, and affects employee moods, organizational morale and can lead to a poisonous culture, that ultimately destroys the fabric in which the foundations of culture is built in the organization.

Emotions are a powerful instigator of behavior, and envy, the unmentionable emotion, is perhaps one of the most pervasive and powerful of all the disruptive emotions that affect our corporate environments. We are not used to talking about envy in our politically correct society or in our workplaces. Yet it is there.

The two-way swing of jealousy with co-workers that may go all the way up the tree into management, creates theatre. Different scenarios can play out and if it gets out of control, your brand and business may suffer damage.

There are many reasons for envy to manifest itself in the workplace: Competing for scarce resources or limited budgets, and vying for important projects, are commonplace situations that can trigger predictable envy; Coveting attributes and qualities a colleague has that another might lack or simply not think about how fragile some people are; Losing a promotion to someone better qualified can also be a trigger for envy.

If anyone has seen the show "Billionaires" on television, you would note that there is an in-house psychologist. When I watched a few episodes on a recent trip to LA, I had an ah-ha moment. That is genius. Imagine having a psychologist at your disposal that you could actually go and talk to at any time about anything you are feeling? The workplace, if utilized correctly, would benefit immensely, be more productive and achieve greater results.

No-one likes someone talking behind their backs, or misinterpreting what they say or do. Sometimes, it feels good when you have a success, or even to share a failure (as a means of getting it off your chest).

How do you deal with a co-worker that is jealous of you?


Jealousy is a hard emotion to deal with, and when it raises its ugly head, it can be disheartening. Stand tall, be strong and keep reaching for the stars.

« Spanx is the number one coolest office in the world today
Never, ever give up on your employees »